These quotes are from  Data Visualization experts showing the benefits of Visualizing Data. This short article will discover how to visualize data into a diagram using Python.

You will educate yourself about the importance of data visualization at the start, then examine the three powerful Python libraries to employ for drawing a diagram, and finally dive into an example on financial data visualization.

Extracting information from the raw data is challenging, and also you can’t identify patterns or trends. Our brain makes us understand pictures much faster than numbers.  We can create graphs and diagrams to understand the data much better. We can find a story hidden under your raw data with powerful graphical tools.  You can understand what this means by an example.

Suppose you started a candy bar manufacturing unit last year and sold various energy bars for the year 2021. In H1 of the year 2021, you have introduced new products, Cinnamon Energy Bar and Berry Energy Bar.

The table below shows the products sales data for 2021 to analyze the performance.

But with this information is not enough to decide products performance. We can’t identify any trends from the given table of data. You can see the patterns or trends with a graphical tool like a histogram chart.

Image 2 shows the graph from the above data. In this graph, the x-axis is Month, and the y-axis shows the percentage of total sales. The products represent in different colors. You can see that the Green color indicates Berry Energy Bar (BEB), the Yellow color represents Cinnamon Energy Bar (CEB), and likewise. Refer to the Legend above the bars.

You can extract the following information from this graph.

From the graph, you can see that we can derive more information such as above, which helps to understand the data and derive patterns easier than raw data.

The above example is a hypothetical case. But in real-time, we can give reasoning behind these patterns. Now let us look at how to visualize qualitative data.

We will learn about the OSEMN data science process.

Now we have to create this Process into a Diagram that makes others understand well and brings clarity.

It is possible to create diagrams using the powerful language Python. We will show you three techniques to draw a diagram.

In this First Technique, employ the Graphviz Python module to create Diagrams. Let’s learn about Graphviz before starting coding.

AT&T Labs Research team discovered this powerful package Graphviz. Graphviz is an open-source graphical visualization software to draw directed and undirected graphs. This software was created with the DOT language script and has filename extension “gv”.

Graphviz has different polygon-based shapes, such as box, polygon, ellipse, etc.  Also, numerous Arrow shapes are available to draw a diagram. You can save the graphs in the following formats: BMP, JPEG, JSON, PDF, PNG. The industry, such as Software engineering, Database, web design, machine learning, and others, use the Graphiz software widely.

Firstly install the Graphviz module with the following command in the terminal :

After installing Graphviz, you have to import the Graphviz module as below.

You can start drawing a diagram by creating a Digraph object. The Digraph is a directed graph that stores node and edges, and the source code is in the DoT programming language.

The above code creates an ‘OSEMN’ graph using a Diagraph object. The comment displays when you run digraph source code.

The above code adds the node to the graph object using the node() method.

The next node is ‘s’ with the label ‘Scrub’ with a height of 1.5 cm and font size of 35 points.  Node for ‘e,’ ‘m’, and ‘i’ are labeled. There are attributes such as fillcolor, fontname, fontsize, image, imagepos, imagescale, and more.

Now create nodes for a short explanation of the data process headings.

Create a node in numbers for each explanation. “1” is for ‘Extract Data from Database, Internet & Survey.’ “2” is for ‘Clean the Data from error & handle missing data’ and so on. Also, you can set different attributes as well.

After this, you need to connect the nodes Headings and Explanation. The edge method can connect between the nodes.

First, connect the OSEM process through the edge method. Connect the edge between o and s, then s and e, and so on.

The constraint =‘false’ attribute makes the node connected in the horizontal direction. The default direction of the edge is vertical.

The arrowhead’s shape is diamond, and its size is 2, as shown above in the code. There are different arrowhead shapes such as box, crow, curve, dot, inv, and more.

The code above connects edges o and 1, s and 2. We use the edges method to join more nodes.

This command prints the source code in DOT language. Refer to image 4.

Code will save the diagram output in the directory ‘’doctest-output‘. The view=True attribute automatically opens the pdf file without searching for it. Refer to image 3.

Technique 2 employs ImageDraw from the pillow module to draw a diagram. Let’s learn about Pillow.

💡 Alex Clark and Contributors are the ones who produce the Pillow Library from the PIL module. The PIL is the Python Imaging Library for creating and manipulating images produced by Fredrik Lundh and Contributors. The programmer uses PIL for advanced image processing such as editing images, creating new images, creating thumbnails, etc. But the PIL was discontinued in 2011 and replaced Pillow for future usage. It supports all the image formats such as BMP, PNG, JPEG, and TIFF.

ImageDraw module generates 2D Graphics from the image.  It creates an object to draw in a given image. In other words, it makes a drawing board and inserts an image into the board for further editing.

ImageDraw has drawing methods such as

Install the pillow library as below:

Next, import the pillow library of Image, ImageDraw and ImageFont modules.

Before moving on, let’s examine the syntax for the ImageDraw module.

After Import, you have to create a new image for drawing the OSEMN diagram.

Employ ImageDraw method as below:

draw.ellipse method is to draw a circle object. 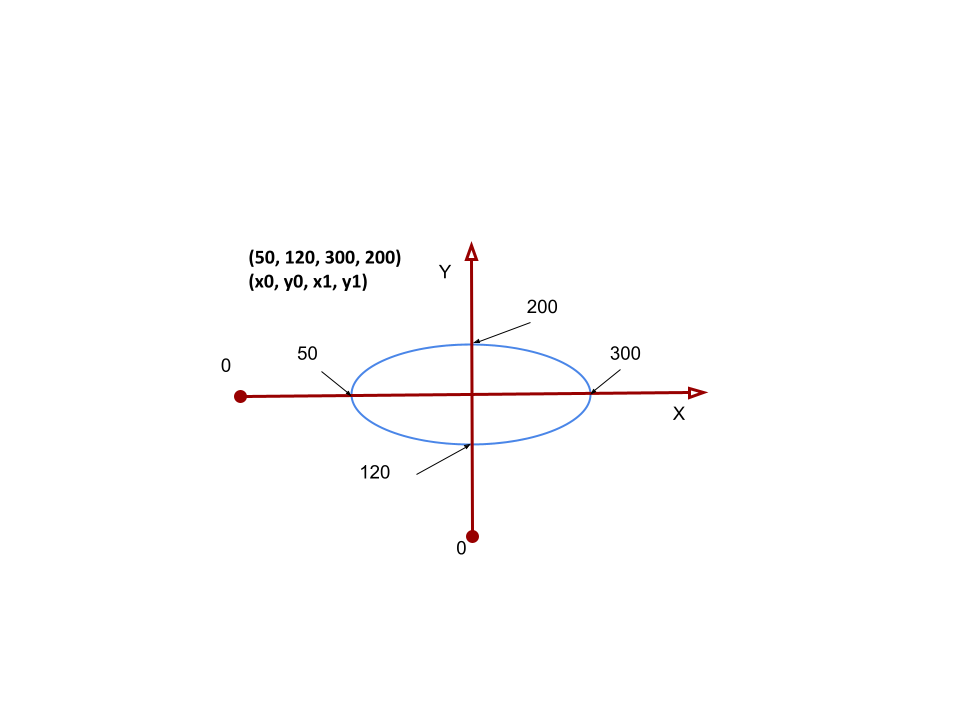 The attribute ‘fill’ fills the color inside the object, i.e., the circle here is white. The value is to be given by RGB code.

The outline is the color for the object’s border, which is black, and the RGB of it is 0,0,0.

Similarly, you have to do for the other circle object with respective locations as shown in through code above.

Next, we need arrows to show the OSEM process in sequence. In the ImageDraw module, there is no arrow Shape object created like a rectangle or circle. So ImageDraw.line method is employed for drawing arrows.

To create a single arrow you must write three lines of code as shown above.

Do these steps for other arrows too.

Create text for each box with ImageDraw.Draw.text method. But font type attribute is mandatory in this method. Identify the path where is your desired font in the system.

Specify the font path and size in ImageFont.truetype methods, then store it into variable size.

From the text method, You can specify the location of the text of Data Process Heading with x and y coordinates as shown in the code.

Next, we mention the headings with double-quote marks. The color of the font is black with RGB code 0,0,0. Mention the variable size in the font attribute.

Likewise, you can create a diagram for explanation of the headings as per the code below:

The explanations of each heading are in a rectangle-shaped diagram. Refer to above code.

Finally, save the output in a jpg file with 110% quality through the save function. Refer to the code below:

Turtle is another technique employed to draw a diagram. Let’s learn about it.

The turtle module is most suitable for beginners to Python.  This Python library enables users to create shapes, diagrams, and pictures from virtual drawing boards.

💡 Info: The Turtle was initially developed with Logo programming Language by Wally Feurzeig, Seymour Papert, and Cynthia Solomon. This popular graphical package was designed for kids to introduce programming. It gives a great resource to learn python programming. Don’t get discouraged! Adults can use turtle also. As we mentioned above, the module helps new programmers to get a feel for the python programming language in a fun and interactive way.

On the virtual drawing board, you find a small triangle-shaped symbol which is a pen for drawing, and this pen is called Turtle.

Import the turtle module as below:

The following code opens a new Python turtle window with a turtle icon:

Set the turtle speed of 5 seconds and pen size of  1 pixel.

Use the virtual pen to draw a diagram on the Python turtle window.

Before moving further to code, let us understand the turtle’s position.

The screen has four divisions with x and y coordinates. The current location of the turtle is in (0,0) position. So to move to the top left, the coordinates have to be negative number x and positive number y, as shown in DIV 2. Refer to image 6 for positioning the turtle.

Initially, we will show you how to draw an oval, arrow, line, and rectangle shape, then show how to insert headings and explanations into the shapes.

Draw oval shapes for data process heading with code below:

After this draw arrow shape connecting between the oval shape.

Now with the following code, draw five straight lines from the oval.

Draw 5 Rectangle shape diagrams for explanation of Headings with below code:

Next let us write the text for Headings and explanation with below code:

Hide the turtle symbol or pen with the following command.

Use turtle.write a function to write the text in the desired locations with the pen.

You are not required to lower the pen because turtle.write makes pen down for writing text.

The above Financial Statements make it harder for you to grasp the essential indicators of the company. So we will draw diagrams to understand the company’s performance more effortlessly.

Here we will use the Graphviz Python library to draw diagrams.

Number and words have information buried. We can’t discover the patterns interpret the data, and draw conclusions by just reading the numbers and words.

With visual representation tools such as diagrams, graphs, etc., we can understand the data quickly and clearly. You have learned in this article how to draw a diagram with powerful python libraries.

These libraries are Graphviz, ImageDraw, and turtle.

For drawing complex diagrams without any images, Graphviz is a better choice. If you need to edit images and use them in a diagram, the ImageDraw library is better. As we know, The Software Scientist created the turtle for kids to learn python programming language.

Beginners can use Turtle for educational purposes and also for creating animated stories. Story with animated diagrams and words are more potent for the reader to understand well.

Hope this article helped you and answered your query. Give your feedback at thoufeeq87.mtr@gmail.com.

Have a great coding!