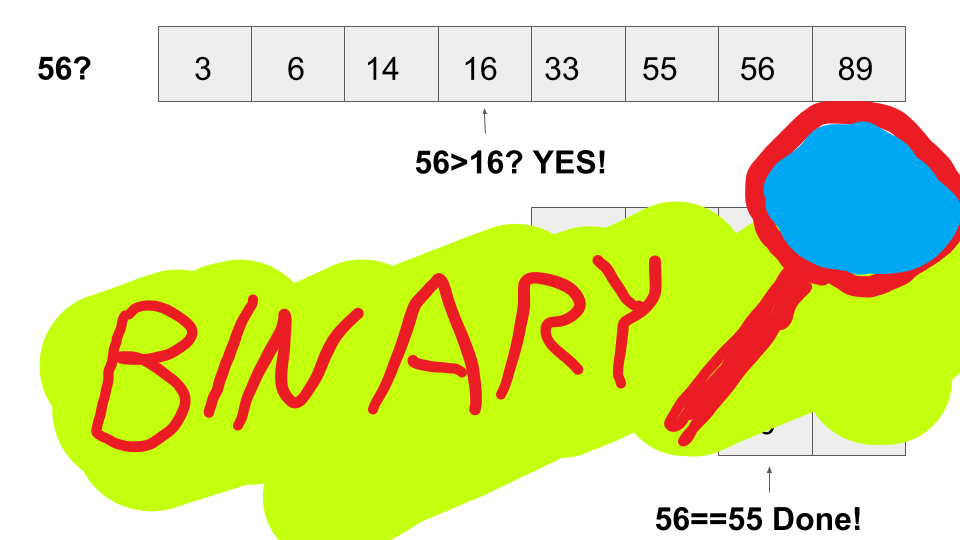 In this article, you’ll learn about a basic algorithm, every computer scientist must know: the binary search algorithm. I have drawn the code from my NoStarch programming introductory book Python One-Liners:

You use these data structures in every single non-trivial program—and in many trivial ones as well! Thus, the impact of efficient searching is significant.

Why Naive Sorting is Bad

Say you want to search an already sorted list for value 56.

The naïve algorithm starts with the first list element, checks whether it’s equal to the value 56, and moves on to the next list element – and repeats the same procedure until the algorithm has visited all elements.

In the worst-case (the searched value is not in the list), the naive algorithm goes over all list elements.

For example, searching a sorted list with 10,000 elements would take approximately 10,000 operations to check each list element for equality with the searched value.

In algorithmic theory language, we say that the runtime complexity is linear in the number of list elements. This is by no means optimal – because the algorithm does not leverage all the available information to achieve the greatest efficiency.

By using the fact that a list may already be partially sorted, we can create an algorithm that “touches” only a few elements in the list and still knows with absolute certainty whether an element exists in the list – or not.

💡 Idea: Instead of traversing all list elements of a given sorted list, the binary search algorithm traverses only log2(n) elements (logarithm of base 2). In other words, we can search the same list of 10,000 elements using only log2(10,000) < 14 instead of 10,000 operations!

How to search a list in logarithmic runtime? The most popular algorithm that solves this problem is the binary search algorithm.

Next, we’ll binary-sort the list in an ascending manner.

The figure shows the binary search algorithm at work. Say you want to find the value 56 in the sorted list of eight integer values. Recap that our goal is to traverse the sorted list in logarithmic time so we cannot afford to touch each element in the list.

The binary search algorithm in the graphic repeatedly probes the element x in the middle of the list (rounding down).

There are three cases:

In each phase of the algorithm, the search space is reduced by half. This means that after a logarithmic number of steps, we have found the element!

Here’s a practical Python implementation of the binary search algorithm:

The algorithm takes as arguments a list and a value to be searched.

Then, it repeatedly halves the search space using the two variables lo and hi.

We repeatedly check in which case of the above cases the mid element falls and adapt the interval of potential elements accordingly by modifying the lo and hi values as described above.

While this algorithm is a perfectly valid, readable, and efficient implementation of the binary search algorithm, it’s not a one-liner solution, yet!

Problem Formulation: Implement the binary search algorithm in a single line of code!

Exercise: Guess the output of this code snippet!

For readability, I’ve broken this “one-liner” solution into four lines – even if you could write it in a single line of code. It’s often better to limit the length of a single line because it makes it easier for readers to understand the code.

I used a recursive way of defining the binary search algorithm in four steps:

After a finite number of steps, the condition lo>hi holds True. This is the base case of our recursion and if we haven’t found the searched element x by now, we return -1 indicating that no such element exists.

We return the index (lo+hi)//2 of the mid element (in the specified sublist) if this element is the searched value.

Note that we use integer division to round down to the next integer value that can be used as index.

However, if the mid element is larger than the searched value, there is no need to search all elements on the right of the mid element. These elements will be larger too because the list is sorted.

Hence, we call the function recursively but adapt the to consider only list elements on the left of the mid element.

I hope that this article improved your general code understanding skills regarding various Python features such as conditional execution, basic keywords, arithmetic operations, and the important topic of programmatic sequence indexing. But more importantly, you’ve learned how to use recursion to make complex problems easier.

Many coders never feel like they have NOT learned enough to apply their skills in the real world. That’s a huge mistake. Don’t be one of those coders — because it’s a self-fulfilling prophecy! They are stuck studying toy projects forever and will never be successful.

Instead, set yourself on a clear path to mastery with a strict 70/30 training plan: 70% practical code projects and 30% theory. Many students have already followed this training plan — and have accelerated their skill level like nothing before. Create your new high-income skill Python and reach Python freelancer level in a few months!

The link leads you to my in-depth Python program for upcoming freelancers and Python professionals.