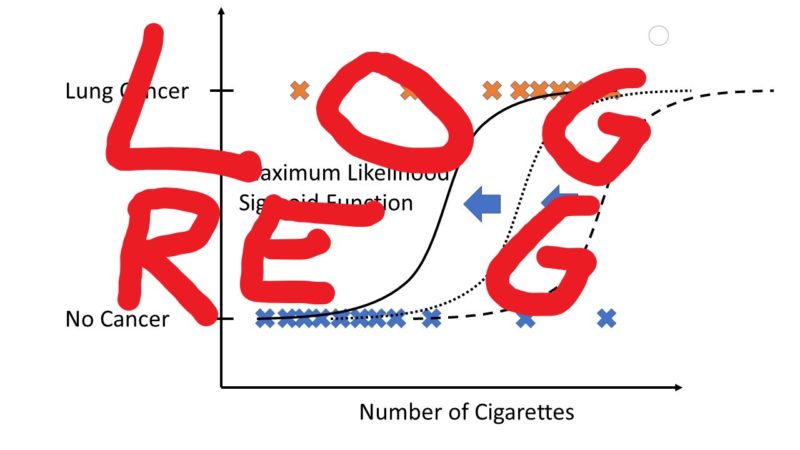 Logistic regression is a popular algorithm for classification problems (despite its name indicating that it is a “regression” algorithm). It belongs to one of the most important algorithms in the machine learning space.

But what if the output is not continuous but categorical? For example, let’s say you want to predict the likelihood of lung cancer, given the number of cigarettes a patient smoke. Each patient can either have lung cancer or not. In contrast to the previous example, there are only these two possible outcomes.

Predicting the likelihood of categorical outcomes is the main motivation for logistic regression.

While linear regression fits a line into the training data, logistic regression fits an S-shaped curve, called “the sigmoid function”. Why? Because the line helps you generate a new output value for each input. On the other hand, the S-shaped curve helps you make binary decisions (e.g. yes/no). For most input values, the sigmoid function will either return a value that is very close to 0 or very close to 1. It is relatively unlikely that your given input value generates a value that is somewhere in-between.

Here is a graphical example of such a scenario:

Have a look at the following example:

There are two new patients (in yellow). Let’s pretend we know nothing about them but the number of cigarettes they smoke. We have already trained our logistic regression model (the sigmoid function) that returns a probability value for any new input value x. Now, we can use the respective probabilities of our two inputs to make a prediction about whether the new patients have lung cancer or not.

So how to select the correct sigmoid function that best fits the training data?

This is the main question for logistic regression. The answer is likelihood. In other words, which sigmoid function would generate the observed training data with the highest probability?

Exercise: What is the output of this code snippet? Take a guess!

The labeled training data set X consists of four patient records (lines) with two features (columns). The first column holds the number of cigarettes the patients smoke, and the second column holds whether they ultimately suffered from lung cancer. Hence, there is a continuous input variable and a categorical output variable. It’s a classification problem!

We build the model calling the LogisticRegression() constructor with no parameters. On this model, we call the fit function which takes two arguments: the input values and the output classifications (labels). The input values are expected to come as a two-dimensional array where each row holds the feature values.

Here is how the input training data (without labels) looks like after converting it using the reshape operation:

Here is the output:

Let’s explore in detail the probabilities of the sigmoid function that lead to this prediction! Simply run the following code snippet after the above definition:

In the previous example, you’ve created a LogisticRegression object using the following constructor:

In most cases, you don’t need to define all arguments—or even understand them by heart. Just start from the most basic example usage and customize as you The LogisticRegression class has many more helper methods. You can check them out here (source):

If you feel stuck in Python and you need to enter the next level in Python coding, feel free to enter my 100% free Python email course with lots of cheat sheets, Python lessons, code contests, and fun!

This tutorial is loosely based on my Python One-Liners book chapter. Check it out!