The translation of an application is usually a fastidious and painful process.

Qt uses its QString class exclusively to manage the strings. This comprehensive class handles Unicode, the world standard for Text and Emoji, natively.

In this article, I will explain the translation process step-by-step. However, I will not go through the tool’s details because Qt provides excellent documentation and many tutorials are available on the Web.

Apart from Python interpreter and your favorite Python IDE, you will have to install the qt package. Qt includes a comprehensive set of tools like pylupdate5, lrelease and pyrcc5 for translating applications into local languages. I will come back to these tools below.

Remark: Although it’s not the subject of this article, I strongly recommend you to use virtual environments (virtualenv or anaconda) for project development. This is one of the essential tools that most of the Python developers use.

You will find hereunder a schema showing the translation process:

Depending on the type and the size of a project, the developer and the translator can be one unique person.

For the creation of the application’s GUI part, there are two options for the developer:

You will find hereunder a quick overview of the process steps:

Preparation of the Python application code

If the developer uses the Qt Designer tool to build the GUI, he must first convert the Qt source file (.ui) into a Python source file (.py). This conversion is performed by executing the pyuic5 tool (step 2). I recommend using a batch file for this. Here is an example:

Pyuic5 tool automatically adds at the end of the python file a function dedicated to the translation. This function translates all the strings found in the Qt source file by using the Qt translate function. So the developer doesn’t need to perform additional action regarding the texts:

Then, the developer just has to call the tr() function for each text to be translated:

The developer has to use the pylupdate5 Qt tool to generate the translation files:

The language used in the translation file’s name must follow strict rules. It is composed of the first letters group of the language string compliant with RFC 1766. In the following table, you will find an extract of the commonly supported language strings provided by Microsoft (Microsoft Language Strings):

Thanks to the Python locale module and its getdefaultlocale function, it’s possible to retrieve the computer system’s local language. This allows us to load the right language file at the application startup automatically. The getdefaultlocale function tries to determine the default locale settings. If the call is successful, it returns them as a tuple of the form (language code, encoding). The language code is composed of two parts, the language, and the country:

As we are interested only by the language, the developer has to use the following code:

Let’s have a quick look at the different sections of this window:

The translator must compile the translation file(s) into a .qm binary format (step 6). The easiest way for the translator consists of using the Qt Linguist integrated release function (“Release” if only one file is open or “Release All” for multiple files):

To keep your application’s coherence, I strongly recommend storing your binary translation files with other resources (logo, pictures, etc.) into a specific resources folder:

The last step of the process consists of loading the translation files into the application. When the developer decides to distribute the application, two options are available for the resources files:

For option B, the developer must first update the resources file Resources.qrc generated by Qt Designer by adding the translation binary files:

The section related to the language is defined inside the qresource tag.

Then, the developer has to use the pyrcc5 Qt tool to generate the Python resources file which will contain all the compiled resources (logo and translation files in our example):

You will find hereunder the code to implement with the specificities related to each option (A or B): 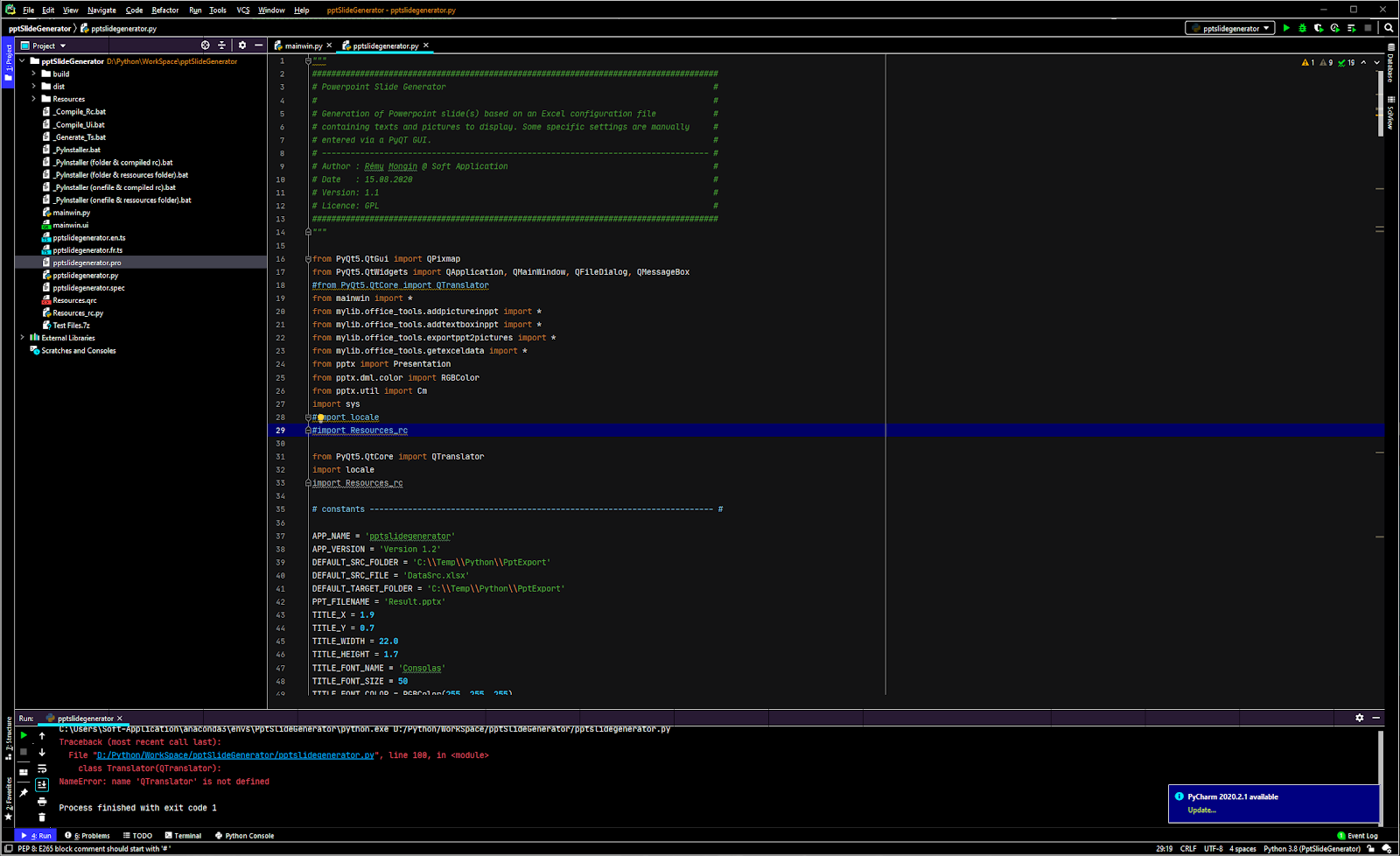 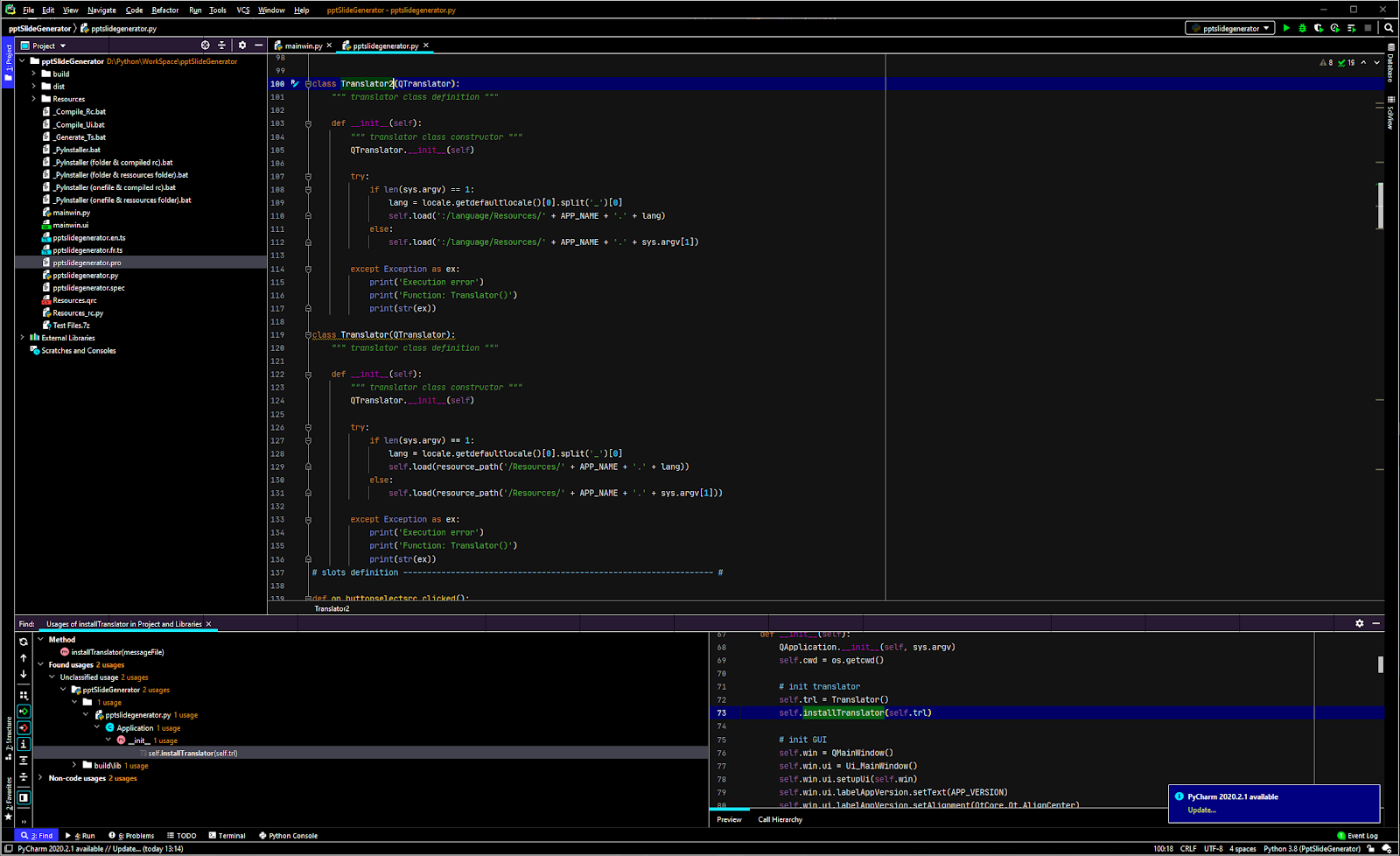 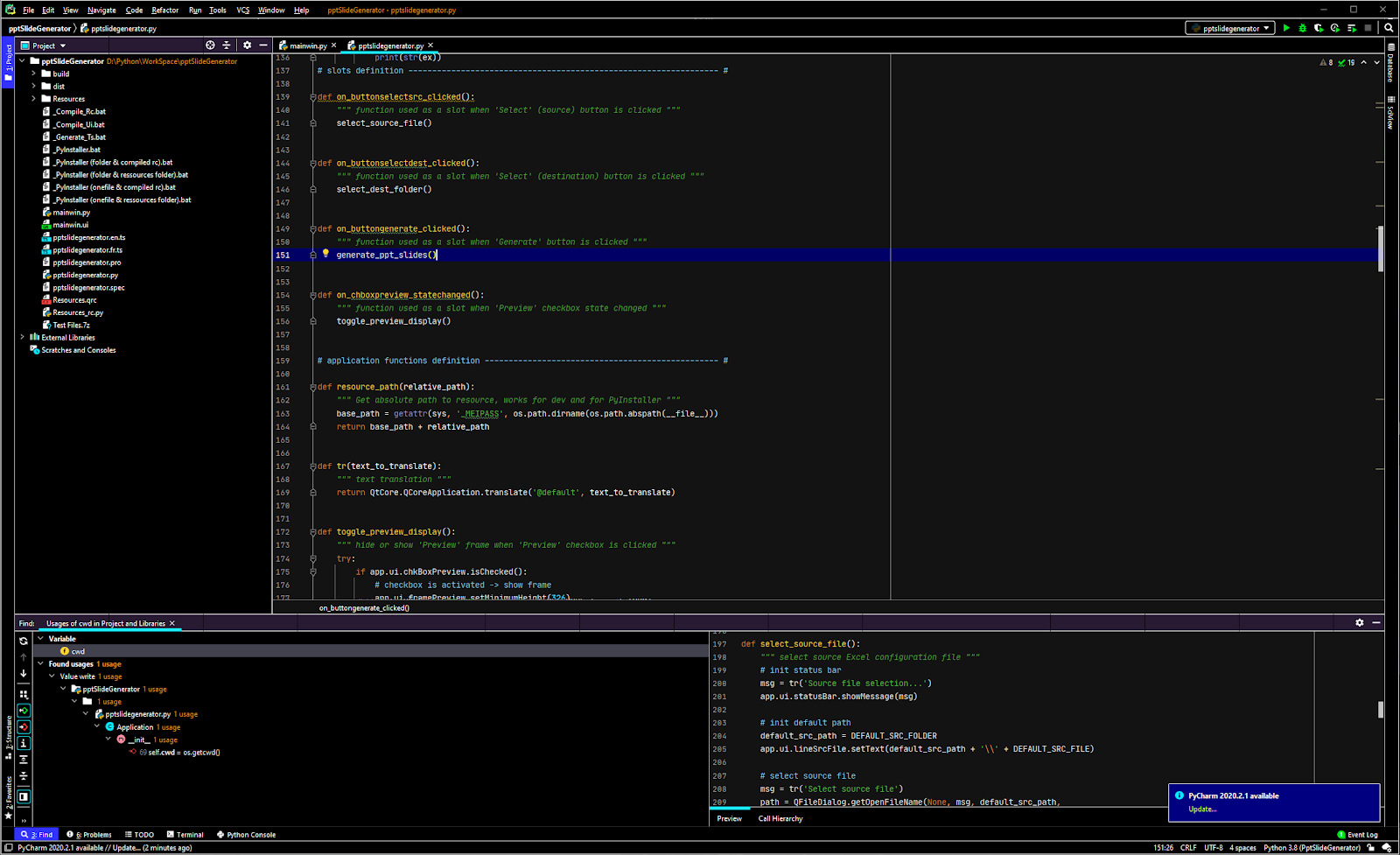 We recognize in this code the language determined with the getdefaultlocale function. Furthermore, we have to add a specific resource_path function to get the path of the resources folder.    This is particularly important when the developer decides to     bundle the application and all its dependencies into a single executable. It’s indeed due to the fact that, when started, the executable creates a temporary folder named _MEIxxxxxx (xxxxxx is a random number) in the appropriate     temporary folder location for this Operating System. 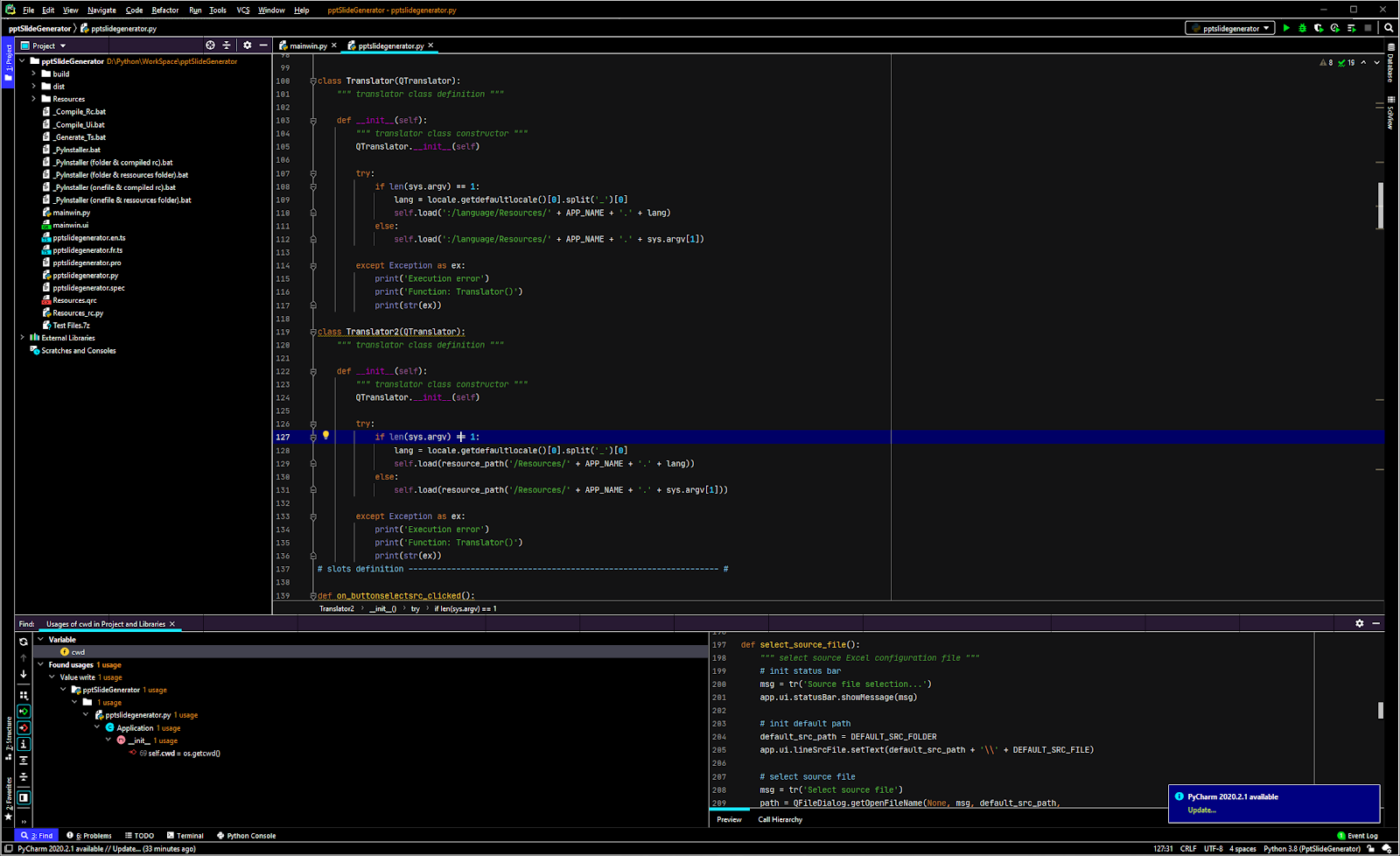 Thanks to the following code, it’s possible to change the language at run-time: 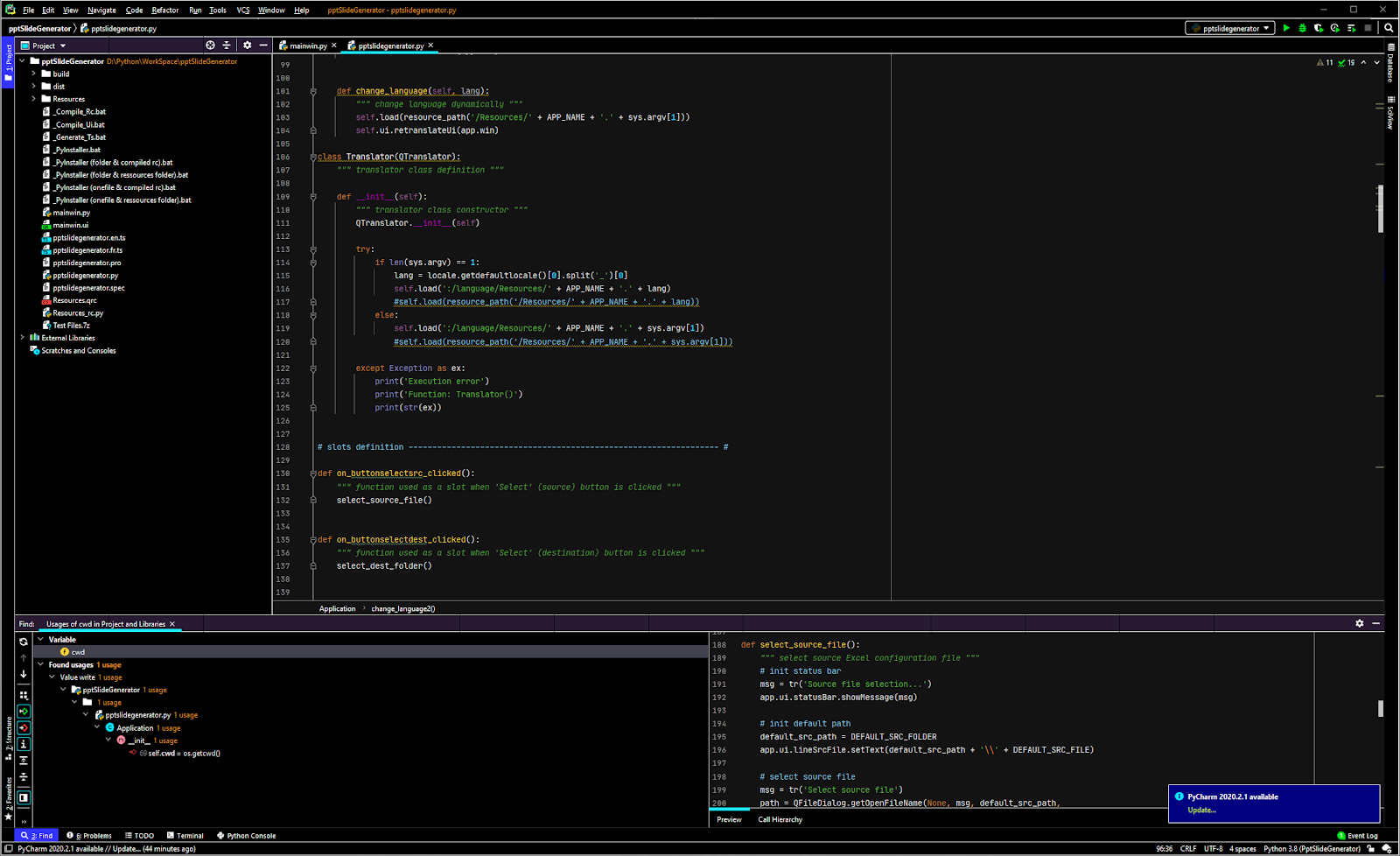 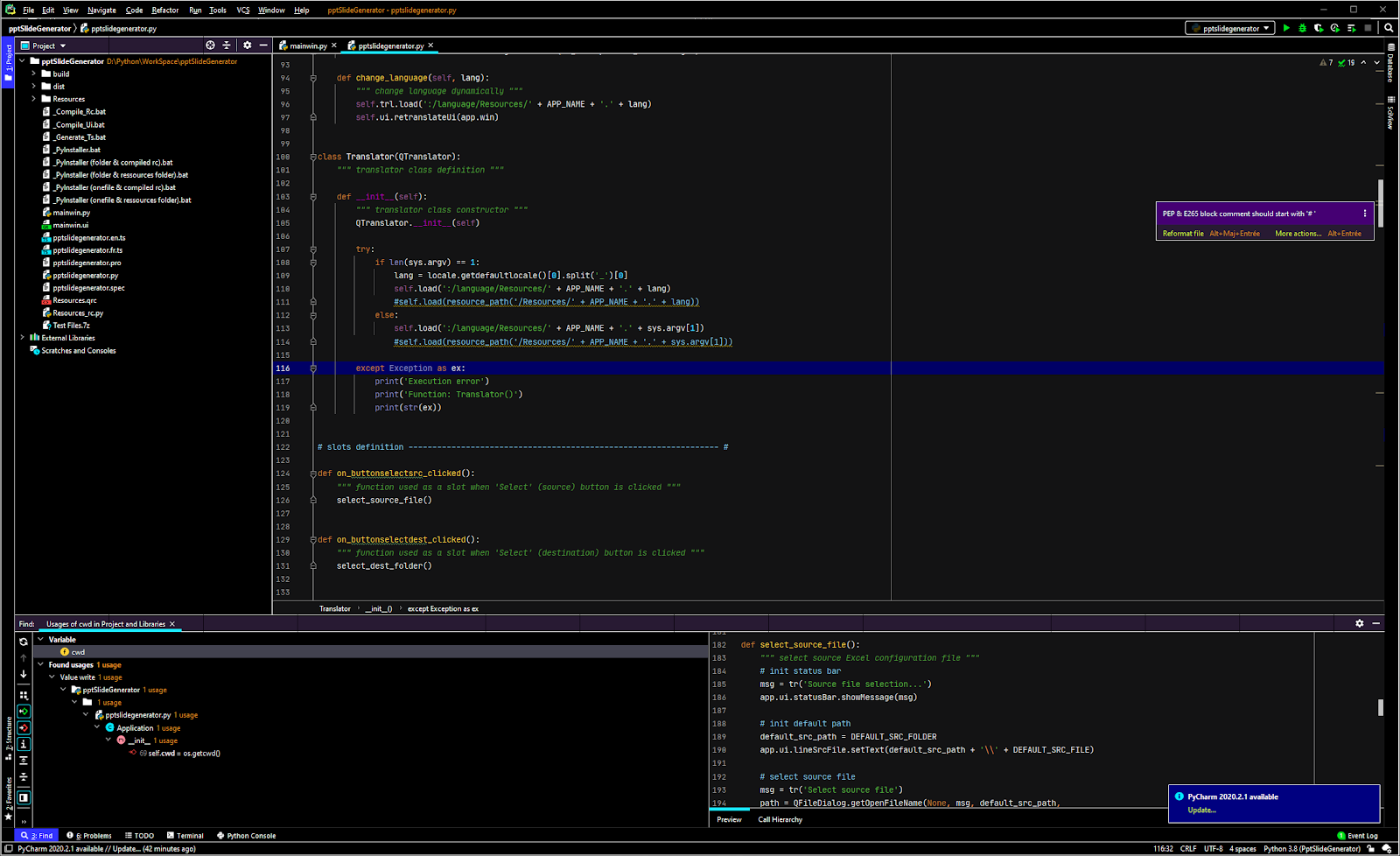 As you may have noticed, translating Qt applications is a very well thought process and everything is planned.

You now have all the tools in hand to broadcast your program anywhere in the world, you just need to find the good translator!