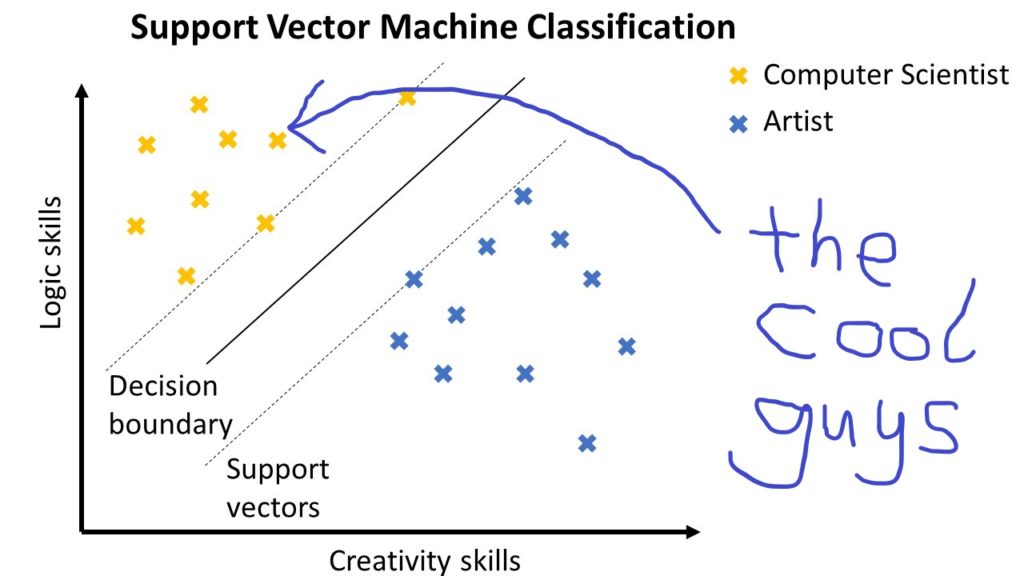 Support Vector Machines (SVM) have gained huge popularity in recent years. The reason is their robust classification performance – even in high-dimensional spaces: SVMs even work if there are more dimensions (features) than data items. This is unusual for classification algorithms because of the curse of dimensionality – with increasing dimensionality, data becomes extremely sparse which makes it hard for algorithms to find patterns in the data set.

Understanding the basic ideas of SVMs is a fundamental step to becoming a sophisticated machine learning engineer.

Feel free to watch the following video that summarizes shortly how SVMs work in Python:

Here is a cheat sheet that summarizes the content of this article:

You can get this cheat sheet—along with additional Python cheat sheets—as a high-resolution PDFs here:

Let’s get a conceptual of support vector machines first before learning how to use them with sklearn.

How do classification algorithms work? They use the training data to find a decision boundary that divides data in the one class from data in the other class.

Here is an example:

Suppose, you want to build a recommendation system for aspiring university students. The figure visualizes the training data consisting of users that are classified according to their skills in two areas: logic and creativity. Some persons have high logic skills and relatively low creativity, others have high creativity and relatively low logic skills. The first group is labeled as “computer scientists” and the second group is labeled as “artists”. (I know that there are also creative computer scientists, but let’s stick with this example for a moment.)

In order to classify new users, the machine learning model must find a decision boundary that separates the computer scientists from the artists. Roughly speaking, you will check for a new user in which area they fall with respect to the decision boundary: left or right? Users that fall into the left area are classified as computer scientists, while users that fall into the right area are classified as artists.

The figure shows three decision boundaries that are all valid separators of the data. For a standard classifier, it is impossible to quantify which of the given decision boundaries is better – they all lead to perfect accuracy when classifying the training data.

But what is the best decision boundary?

Here is an example:

Let’s have a look how the sklearn library provides a simple means for you to use SVM classification on your own labeled data. I highlighted the sklearn relevant lines in the following code snippet:

Guess: what is the output of this code?

The code breaks down how you can use support vector machines in Python in its most basic form. The NumPy array holds the labeled training data with one row per user and one column per feature (skill level in maths, language, and creativity). The last column is the label (the class).

Because we have three-dimensional data, the support vector machine separates the data using two-dimensional planes (the linear separator) rather than one-dimensional lines.  As you can see, it is also possible to separate three different classes rather than only two as shown in the examples above.

The one-liner itself is straightforward: you first create the model using the constructor of the svm.SVC class (SVC stands for support vector classification). Then, you call the fit function to perform the training based on your labeled training data.

In the results part of the code snippet, we simply call the predict function on new observations:

Here is the final output of the one-liner:

This tutorial provides you the quickest and most concise way of starting out with support vector machines (SVMs). You won’t find any easier way on the whole Internet.

In fact, I wrote this as a chapter draft for my book Python One-Liners that also introduces 10 machine learning algorithms, and how to use them in a single line of Python code.

Here’s more about the book: