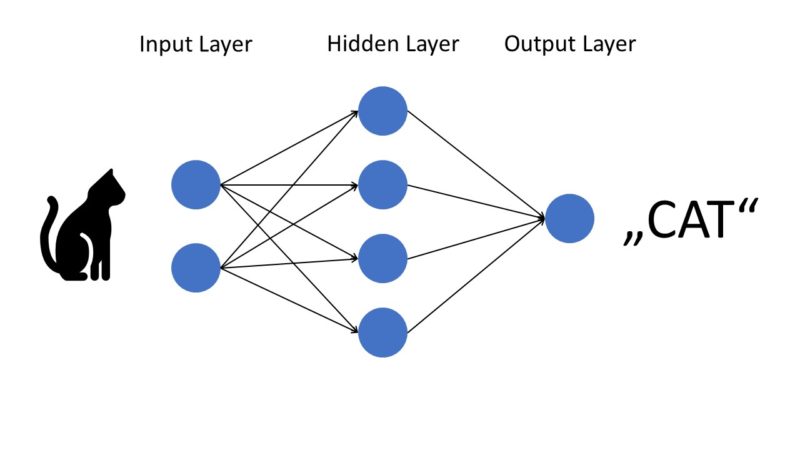 Neural Networks have gained massive popularity in the last years. This is not only a result of the improved algorithms and learning techniques in the field but also of the accelerated hardware performance and the rise of General Processing GPU (GPGPU) technology.

In this article, you’ll learn about the Multi-Layer Perceptron (MLP) which is one of the most popular neural network representations. After reading this 5-min article, you will be able to write your own neural network in a single line of Python code!

If you want to skip the background information, feel free to skip to the sklearn section about the MLPRegressor and copy&paste the code to use neural networks in your own script right away!

My goal with this article is not to write another simplified introduction into neural networks using only dummy data. Instead, I decided to use relatable real-world data from my fellow Pythonistas. So I have asked my email subscribers to participate in a data generation experiment for this article.

If you are reading this article, you are interested in learning Python. So I asked my email subscribers six anonymized questions about their Python expertise and income. The responses to these questions will serve as training data for the simple neural network example (as a Python one-liner) at the end of this article.

The training data is based on the answers to the following six questions:

The sixth question approximates the skill level of a Python coder. Finxter.com is a puzzle-based learning platform which assigns a rating value to any Python coder based on their performance in solving Python puzzles.

Let’s start with visualizing how each question influences the output (the skill rating of a Python developer).

Note that these plots only show how each separate feature (question) impacts the final Finxter rating but it tells us nothing about the impact of a combination of two or more features. Some Pythonistas didn’t answer all six questions — in this case, I used the dummy value “-1”.

What is an Artificial Neural Network?

The basic idea is to break the big task of learning and inference into a number of micro-tasks. These micro-tasks are not independent but interdependent. The brain consists of billions of neurons that are connected with trillions of synapses. In the simplified model, learning is nothing but adjusting the “strength” of synapses (also called “weights” or “parameters” in artificial neural networks). Creating a new synapse is represented as increasing the weight from zero to a non-zero value.

This Figure shows a basic neural network with three layers (input, hidden, output). Each layer consists of a number of neurons that are connected from the input layer via the hidden layer to the output layer. In the example, the neuronal network is trained to detect animals in images. In practice, you would use one input neuron per pixel of the image as an input layer. This can result in millions of input neurons that are connected with millions of hidden neurons. Oftentimes, each output neuron is responsible for one bit of the overall output. For example, to detect two different animals (for example cats and dogs), you’ll use only a single neuron in the output layer that can model two different states (0=cat, 1=dog).

The idea is that the activation of the input neurons propagates through the network: the neurons “fire”. A neuron fires with higher likelihood if its relevant input neurons fire, too.

But let’s have a detailed look into how neurons work mathematically.

Each neuron is connected with other neurons. But not all connections are equal. Instead, each connection has an associated weight. You can think of the weight as how much of the “impulse” of the firing input neuron is forwarded to the neuron via the connection.

The neuron itself simply sums over all inputs to calculate its own output. In this way, the impulses propagate through the neural network.

There are many different network structures, training algorithms, and activation functions. This article will show you a hands-on approach of using the neural network now, within a single line of code. You can then learn the finer details as you need to improve upon this (e.g. start with the Wikipedia article).

The goal is to create a neural network that predicts the Python skill level (Finxter rating) using the five input features (answers to the questions):

We use the -learn () library for neural network regression.

In the first few lines, we create the data set. The machine learning algorithms in the scikit-learn library use a similar input format: Each row is a single observation with multiple features. The more rows, the more training data exists; the more columns, the more features of each observation.

In our case, we have five features for the input and one feature for the output value of each training data.

The one-liner simply creates a neural network using the constructor of the MLPRegressor class. The reason I passed max_iter=2000 as an argument is simply because the interpreter complained that the training does not converge using the default number of iterations (i.e., max_iter=200).

The only thing left is calling the predict function on some input values:

In plain English: If

the neural network estimates that your skill level is VERY low (Finxter.com rating number of 94 means that you cannot even understand the Python program print('hello world')).

So let’s improve on this: what happens if you invest 20 hours a week learning and revisit the neural network after one week?

Not bad, your skills improved quite significantly! But you are still not happy with this rating number (an above-average Python coder has at least 1500-1700 rating on Finxter.com), are you?

Let’s see what happens to your rating.

Again, we made significant progress and doubled your rating number! But buying Python books alone will not help you much. You need to study them! Let’s do this for a year.

Boom! Suddenly the neural network considers you to be an expert Python coder. A very wise prediction of the neural network, indeed! Learn Python for at least a year and do practical projects and you’ll become a great coder.

In this article, you have learned about the very basics of neural networks and how to use them in a single line of Python code. As a bonus, you may have learned from the questionnaire data of my community that starting out with practical projects — maybe even doing freelancer projects from day 1 — matter a lot to your learning success (the neural network certainly knows that).

Some machine learning algorithms are more important than others. Learn about the “8 Pillar Machine Learning Algorithms” in my new course on the Finxter Computer Science Academy!