Thus, if __name__ == '__main__': evaluates to True if you use it in your main file (the one you run with python main.py). If you import it indirectly, it evaluates to False.

This is useful because you usually don’t want to run code with side effects when importing modules.

You can play with the code in this minimal example:

If you are learning Python programming step by step, you would have bumped into the above piece of code snippet somewhere. Even if you have not, I am sure you will soon come across it, and this might feel like a jerk in your so far smooth journey of learning Python programming. I have been there. I was going through a book on Python programming when I first saw this piece of code, and I thought—wait a minute, did I miss anything on my way up to here? Then I went back, revising the last few pages to figure out what I missed, and this loop went on for a while before I finally sat down to face the demon, and honestly, I smiled when I figured it out, it is that simple. Maybe, we learn this way. We go back and forth, keep jumping, and then one day, the magic happens. The only thing that works is not giving up.

Today I will try to make this understanding simple for you in a way that will hopefully bring a smile to your face if you have been in the loop of getting a hint of what it is and then keep forgetting.

To understand what is if __name__ == __main__ used for we will dive into some code examples first to understand what __name__ and __main__ are. Then we will cement the learning through another example. So be patient and go through the article carefully. The code snippets may look a little confusing but wait until we explain and see what is happening exactly.

Let us start with __name__. Simply put, __name__ is a special variable that is built-in in Python.

In Python, we can run code as a source file or, in other words, a python code that runs on its own (read – not imported from some separate Python source file). This sentence may be confusing at the moment, but let us explore this further.

Look at the code snippet below. It is a simple python file with just one line:

Simply put, we are asking Python to print the value that __name__ variable has at this moment. Notice there is no import statement or even any other line of code above it.

Check the output in Figure 2 below. We run the above lines of code and find the output

We import module1.py into module2.py and ask Python to return the second module’s name (second because this is the second python code we are running) stored in __name__ variable again.

Interestingly, in Figure 5 below, we have the output

The above information summarised simply can be explained as follows. Python starts executing the first line of code found in a Python file, but before it runs anything to show the output, Python defines some special variables. __name__ is one such variable. When the source file is executed on its own i.e, not being imported from some other source code, the __name__ variable is set to value __main__, and hence the output we got in Figure 3 was First Module’s Name : __main__. If you import the file from some other module (as in the code snippet from Figure 4), the value of __name__ variable is set to the name of the module it is imported from. Hence the output in Figure 5.

Now let us look at the sequence of execution.

But let’s think only concerning the code in module2.py. In the real world, with module2.py I would not like to print the output from module1.py rather only import some functionality and get output for the lines of code written in module2.py i.e. Second Module’s Name : __main__

But how can we do it? There has to be a way because this seems more logical that way. Refer to the code snippet below in Figure 6.

Putting it all into a real-world example

We now take a more generic example, which would make more sense of all we have discussed above.

In the code snippet from modules.py below in Figure 10, we import cube(num) function from cubes.py and try to print cube of 10 in line 3. Logically, we are trying to use the function cube(num), which returns a cube of any given input number.

However, look at the output below. We have the output of both the programs cubes.py and modules.py. This is not what we intended or wanted to do.

Remember the explanation from above where we used if __name__ == ‘__main__’ to limit the execution of code from modules1.py. Let us try and implement the same idea and see if that works here. 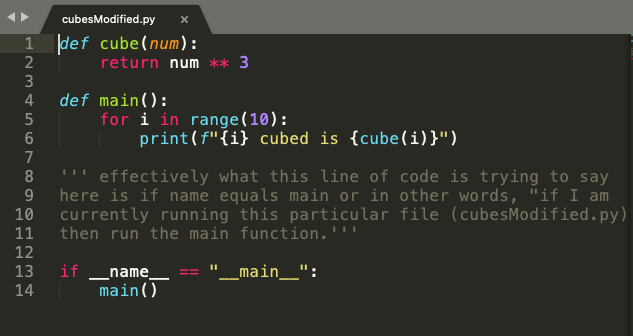 We run cubesModified.py and get the output as below and per our expectation.

I hope this explanation helps you with a better understanding of what does if __name__ == ‘__main__’. Go ahead and play around with the code in the code editor and cement your understanding. Best of Luck!!

This article is contributed by Finxter Abhigyan Ojha. You can find his Upwork profile here.